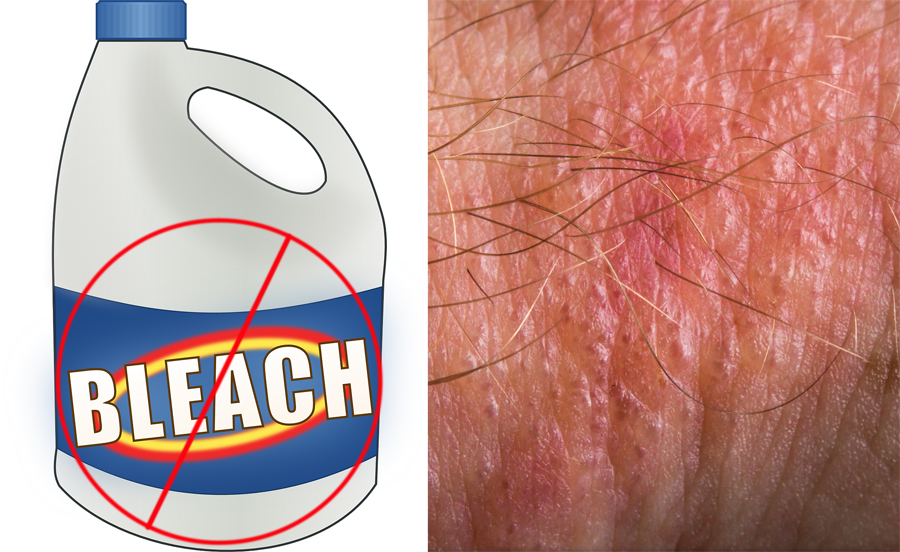 Poison ivy rashes and blisters are never fun. They itch, they hurt, they’re ugly. What’s more, treating them is a lot of hassle. Fortunately, there are various ways to rid of them.

One thing that has come up as a way to do this is the use of bleach. So the question is ”Can you put bleach on poison ivy rash?”

Does bleach get rid of poison ivy? Here’s the thing: Bleach can be used to help rid of urushiol, the toxic resin secreted by poison ivy and others belonging to the plant family Anacardiaceae. It is urushiol that actually causes the allergic reactions to poison ivy, poison oak, and poison sumac. Together with water and sometimes other ingredients, bleach can effectively wash the toxin off clothes, shoes, and gears that may have come in contact with the poisonous plant.

That’s good, right? However, the effect isn’t quite true when bleach is used to treat the skin rashes directly. In fact, bleach on poison ivy rash can do more harm than good, if at all. Using bleach for treating poison rashes is definitely a big yet common misconception.

Bleach may seem like a quick fix. It isn’t. It would be more like an additional source of damage to one’s body. Applying bleach directly will only make the skin more sensitive and irritated. Infection may also possibly follow. Of course, the same is true with bleach on poison ivy blisters.

Bleach is a caustic material. It is a chemical that can be harsh on the skin. The bad effects happen because when applied, it removes the skin’s top layers, leaving/making the skin more weak and vulnerable. It can damage tissues and prolong the healing of wounds. It not only makes the rash worse but causes the skin to become more susceptible to rashes again.

Using Other Treatments for Poison Ivy

Instead of bleach, there are more soothing and harmless things that can be applied or used to treat rashes and blisters. The most common is mild soap and water for cleaning the rashes. Oozing wounds are covered with bandage after to prevent bacterial infection.

Over-the-counter creams, ointments, lotions, and gentle cleansers can be bought. Calamine lotion and cortisone cream are very popular when it comes to rashes.

Some people take oatmeal or baking soda baths, soaking their bodies in tubs to get relief. Never try a bleach bath for poison ivy rashes! Incidentally, there are home or DIY remedies that can be made from oatmeal, baking soda, and potato. Each can be made into a paste and applied directly to affected areas.

Another effective food-related treatment is the use of apple cider vinegar. Like a regular cleanser, simply dab it on the face and affected areas using a cotton ball.

There are also a few homeopathic treatments in the market. Rhus Toxicodendron (Rhus tox) and Croton Tiglium (Croton tig) are specifically meant to counter the effects of poison ivy. Use Oral Ivy for treating poison ivy symptoms. Put 10 drops of oral ivy in 2 ounces of water every 2 hours as needed. As symptoms improve, reduce it to once every 4 hours, then twice daily until symptoms disappear. Place drops under tongue in 2 ounces of water at least 15 minutes before or half hour after eating, brushing teeth or drinking anything except water.

For first aid and even as a preventive measure when going hiking or trekking, one can bring along with him/her enough Zanfel Poison Ivy, Poison Oak, and Sumac Wash and/or Tecnu Original Poison Oak and Ivy Outdoor Skin Cleanser. Both are known to be very effective in providing relief.

Zanfel relieves pain and itching in just a matter of minutes. It does not only treat rashes and other symptoms, rather it removes urushiol from the skin, which is the cause of the rashes and itchiness in the first place. There is a suggested amount to use, but some have found that a little amount can already go a long way. Simply lather it then spread on affected areas. The itchiness will stop after 20 to 30 minutes. Then it’s time to rinse off.

The best part is Zanfel can be used at any stage since it can be applied anytime after exposure to any part of the body, including the face and genitals. So apply it if contact with poison ivy is suspected, or when there are rashes already, or when the allergic reactions have reached the blister stage.

Do take note that systemic, blood-based reactions cannot be treated with Zanfel. That requires medical attention, not simple applications on the skin.

Tecnu Original is a liquid skin cleanser that should be applied as early as possible to remove the urushiol from the skin. That should prevent development and spread of the poison ivy rashes. People who love the great outdoors or working on forestry should do wise and benefit from taking Tecnu with them in case of emergency.

If contact with poison ivy is suspected, apply it already within eight hours – it is better to be safe than sorry. The method of application is pretty easy and direct: just rub it around for two minutes then rinse with cool water (or wipe it off using a piece of cloth).

Don’t be stuck with bleach! There are tried-and-tested and safer ways to treat a poison ivy rash. Remember, the intention is to treat, not to make things worse.

The next time someone gets into trouble with poison ivy, be wise and leave bleach out of it.