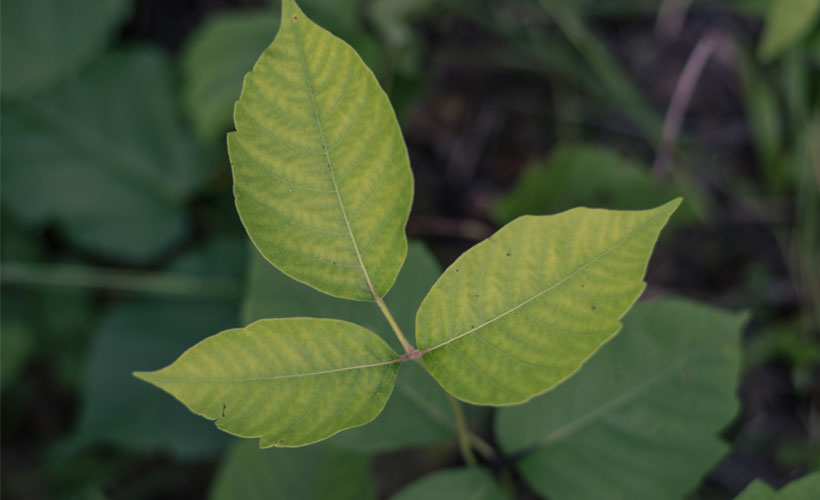 Myth: You can identify poison ivy by seeing a group of three green leaves.

Fact: Yes, three leaves are most common. However, the CDC warns that the shape and the number of leaves may vary depending on the species, the local environment, and the season. It’s also fair to state that not every plant that has 3 leaves is poison ivy.

Myth: Your skin must come into direct contact with the plant itself in order to develop a rash.

Fact: An allergic reaction will occur if a person comes in direct contact with the sap oil (urushiol) on a plant or on any surface, from yard tools to a pet’s fur to clothing. The oil can linger on almost any surface for up to five years! Even fallen leaves are still active.

Myth: Clothing will protect you against catching poison ivy.

Fact: While it decreases direct skin exposure, your clothing will still get the urushiol oil on it which can later be spread by touching your contaminated clothing. To protect yourself from both direct and indirect contact, always wear long sleeves, pants, boots, and nonpermeable gloves. It is best to wash exposed clothes separately and to clean yard tools with rubbing alcohol or soap and water.

Myth: A poison-ivy rash can spread to other parts of your body or onto another person from skin-to-skin contact or through weeping blisters.

Fact: Because poison ivy blisters do not contain urushiol, you can’t spread the rash to other parts of your body or to others through contact with them—as long as the skin is cleaned after exposure. However, if you have any urushiol oil remaining on your hands or any other body part that has not had the oil removed, then you can spread the rash that way.

Myth: You can’t get poison from this plant if it is already dead.

Fact: Not true! Even if the plant is dead, you should still avoid it. Urushiol oil can stay active for years on surfaces.

Myth: Never getting a rash means you are immune to poison ivy.

Fact: Some people do not develop an allergic reaction when they are exposed to poison ivy but this does not necessarily mean they have an immunity. There have been cases where people don’t experience their first reaction until they have been exposed multiple times. Also, keep in mind that a person’s sensitivity to urushiol can change over time or even from season to season. People who were not sensitive as children can develop a hypersensitivity to poison ivy as an adult and vice versa.

Myth: Poison ivy has the same effect and isn’t a threat than it was in the past.

Fact: According to PNAS, they reported that poison ivy—and poison oak and poison sumac—might be getting stronger over time as a result of increased carbon dioxide in the atmosphere.

They cited that a rise in carbon dioxide both fueled the growth of the weed and increased the potency of urushiol. They experimented with planting PVC pipes and blowing carbon dioxide on the plants while other plants vented normal air. The result was poison ivy was very responsive to the increased intake of carbon dioxide in the atmosphere. The result of this made the plant 30% much stronger than it used to be.

Being knowledgeable about poison ivy facts are essential when you are going on a hike or camping outdoors. It prevents us from curiously checking on any plant and assume it is not poison ivy. Having known all these facts can make our hiking and camping trips a much safer and enjoyable experience.

« Is This Poison Ivy?
How to Treat Poison Sumac Rash While on the Trail »